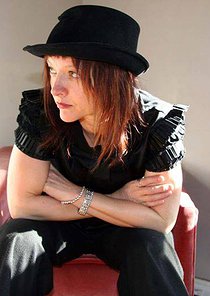 In My Fair Lady – The Punk Version we meet a young dancer named Jody and her mentor Adam. But Adam is not just any mentor: he is the anarchistic new wave/punk proprietor of an alternative art club and the unofficial kingpin of Winnipeg’s underground scene.

In My Fair Lady we see how innocence is willingly corrupted and watch a young mind gain independence set against the backdrop of 1980’s Winnipeg and San Francisco.

With the use of unconventional staging, an improvised opaque projector and over ninety personal photographs, My Fair Lady is a short story set as an intimate performance piece in which the audience is privy to the privacy of the performer’s world.

Read a review in The Reykjaviík Grapevine here. We’ve reprinted a portion here below.

Rita’s second performance of the evening, “My Fair Lady—The Punk Version,” couldn’t have been more different, but nonetheless just as gritty and compelling as “The Damage is Done.” In “My Fair Lady – The Punk Version,” the listener is taken to 1980s Winnipeg and meets Jody, a young wide-eyed ballerina who is just waking up to the world. Then Jody meets Adam. An older man with a punk-rock attitude, Adam tutors Jody and introduces her to the underground anarchist movement, helping her to develop her own independent mind against the background of her controlling and oppressive boyfriend, Keith. Full with sex, drugs and punk-rock-and-roll, Rita’s performance not only explores the willing loss of innocence, but also has the same spirit of revolution evident in “The Damage is Done.”

As Rita narrates the story, however, she also projects a series of images onto the wall so that the audience not only hears Jody’s point of view, but also more importantly sees it. As Rita places photograph on top of photograph, she brings to life what Jody is seeing but also mirrors the building up of experience, layer upon layer of things learnt by the young dancer Jody.

Rita’s two performance pieces, “The Damage is Done” and “My Fair Lady—The Punk Version,” may vary in content and subject matter, but both reverberate with the stirrings of revolution, the spirit of change. Located in a small, grass-roofed building out in Vogar, the audience enjoyed an evening of tightly written, well-executed performance that left a tinge of both sadness and hope. Rita allowed the audience a deeper understanding of revolution, and how it has the power to make or break: whether fighting for freedom from Communist oppression, or experiencing a mini-revolution within one’s own self.